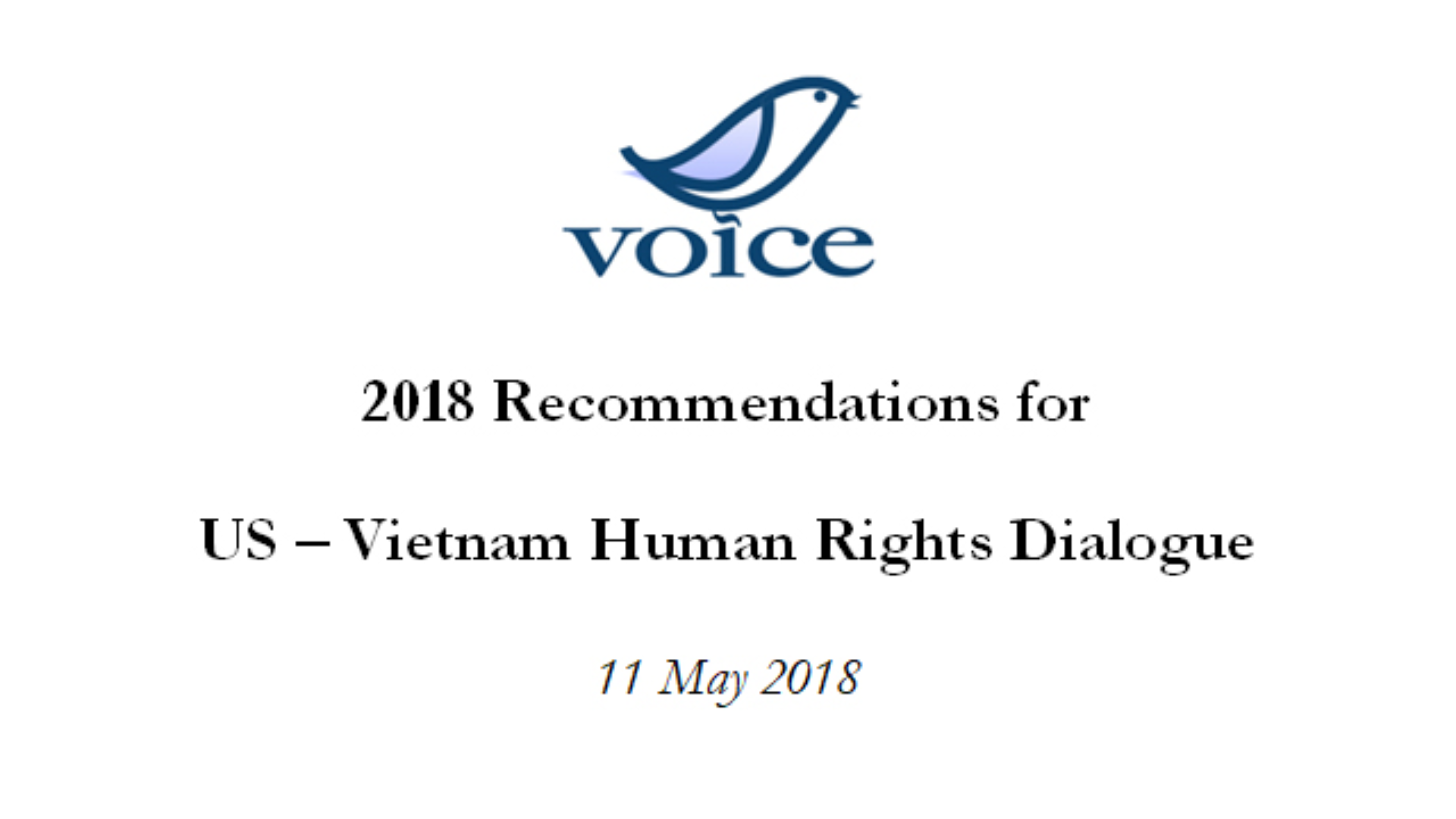 Vietnam implements a number of vaguely-worded and restrictive laws to punish individuals for exercising fundamental rights including:

a. Freedom of Religion

Since the new Government of Vietnam came into power in May 2016, at least 59 human rights defenders have been arrested and imprisoned, many of whom are Christian fighting for religious freedom. The authorities have instigated state-sponsored assaults against those who dare to speak up, especially Catholic villagers in Central Vietnam whose lives have been adversely affected by the Formosa environmental disaster.

‘Hoi Co Do’ (The Red Flag Groups) have been formed and sponsored by the authorities in many parts of Vietnam to incite violence and hatred against parishes critical of the government’s policy concerning the Formosa incident. For example, on 17 December 2017, Parish Ke Gai of Diocese Vinh in Nghe An Province was attacked by hundreds of members of a Red Flag Group due to their activism in protecting the environment resulting in scores of parishioners being injured. See video clip below produced by the Redemptorist Church (with English subtitle):

This marks the first time a new tactic has been used by the authorities to set non-Catholics against Catholics. It is a deliberate state attempt to create tension and sow distrust between faith-based groups.

The independent Hoa Hao Buddhist Church has also suffered much throughout this past year. Buddhist ceremonies organized by the Church were shut down by the authorities and at least, fifteen (15) members of the Church were arrested last year. One of their leaders, Mr Vuong Van Tha, was sentenced to 12 years’ imprisonment while his son was sentenced to 7 years on 23 January 2018.

Further, the authorities continue to harass and persecute religious leaders of unregistered religious groups by either demolishing their temple and confiscating the property (Lien Tri Temple in Saigon) or attempting to confiscate it (Thien An Monastery in Hue) or engineering direct attacks (including physical assaults) against many Protestant church leaders in the Highlands. Many of them are, to date, banned from traveling within and outside of Vietnam despite guarantees made in the new Law on Religion and Belief concerning freedom of religion and under Vietnam’s own Constitution.

b. Freedom of Expression

Article 258, also known as ‘Abusing democratic freedoms to infringe upon the interests of the State, the legitimate rights and interests of organizations and/or citizens.’ (now revised as Article 343 in Vietnam’s Penal Code, which came into effect on 1 January 2018). Those who are convicted under this article face up to seven years’ imprisonment. Article 258 has been used to prosecute a wide variety of people for allegedly ‘abusing’ their freedom of speech.

Article 88, also known as ‘conducting propaganda against the Socialist Republic of Vietnam’ (now revised as Article 117) has been widely used to imprison those who raise their voice in whatsoever forms to criticize the government and the Communist Party. The range of penalties is between three and twenty years imprisonment.

Article 79, also known as ‘carrying out activities aimed at overthrowing the people’s administration’ (now revised as Article 109) is designed to prevent dissidents from organizing themselves to compete politically. This law can be used against anyone who peacefully organizes to oppose the party’s dominance or its policies. Organizers, instigators and active participants can face between twelve years to life imprisonment or capital punishment, while other accomplices can face between five to fifteen years imprisonment.

The Law on Association has not been adopted though at least 16 draft bills had been brought before the National Assembly in the past decade. The delay indicates the constant vigilance and reluctance of the authorities in enacting a law they consider to be ‘politically sensitive’. The latest bill itself, however, failed to be passed after many civil society organizations raised their concern about its repressiveness. Article 8, inter alia, bans every association from cooperating with foreign organizations or receiving foreign funds.
Association in the form of political organization or party is strictly banned. Members shall be charged with ‘carrying out activities aimed at overthrowing the people’s administration’ and given lengthy prison terms, including life imprisonment or capital punishment under Article 79/109 of the Penal Code.
The Law on Demonstration was scheduled to be discussed and passed by the National Assembly in 2015, however, it was removed from the agenda in 2016, 2017 and 2018. The National Assembly itself does not plan on bringing the law back to the table for discussions, while at the same time, the Ministry of Public Security – the government agency responsible for drafting this law – keeps delaying the submission of the draft law.

Independent labour unions are banned. Strikes must be registered under harsh requirements, and labour activists are subject to continuous surveillance and harassment.
GONGOs (government-organized non-governmental organizations) are given space for their activities on the condition that they work to further the government’s interests. While dozens of human rights activists are banned from traveling outside of the country, there have been many cases where GONGO staff enjoy the freedom to travel abroad and attend international conferences, in some cases, as police informers in disguise. Security officers are also said to put in a great deal of effort to cause splits between registered NGOs and independent ones. For example, human rights activists are often blocked from attending events held by registered NGOs.

There are hundreds of bloggers (including Facebook users) and HRDs who frequently write about political and human rights issues in Vietnam. Since the most recent Party Congress early 2016, the Vietnamese government has arrested 59 activists, almost half of the total number of the current prisoners of conscience in detention. The fact that the arrested vary from human rights lawyers to anti-corruption students, from land-lost farmers to labor rights activists, from environmentalists to unregistered religious groups’ followers proves that the government is systematically applying a zero tolerance policy towards dissent.

In addition, travel ban is one of the tactics used by the authorities to further isolate Vietnamese activists from the regional and international civil society communities. Statistically, over 100 human rights defenders, including bloggers, are banned from traveling outside and within Vietnam. Human rights defenders travelling abroad have had their passports confiscated by police upon their return to Vietnam and many of them are placed on a blacklist forbidding them to travel again. As a result, these activists lose their chance to meaningfully participate in regional and international forums to raise public awareness of Vietnam’s human rights situation as well as to learn from fellow activists in the region.

1. Follow Germany’s lead by actively engaging with and calling on the authorities, particularly the Ministry of Public Security (MPS), to lift the travel ban against all HRDs, and refrain from imposing restrictions on their right to freedom of movement in the future.

2. Raise the cases of the following imprisoned human rights defenders and offer them asylum in the US even if some of them may not take up the offer:

3. Call for the grant of access to visit prisoners of conscience and to do so periodically. This will send a strong message to the authorities that cases of concern are being monitored.

4. Call for the elimination and/or amendment of vaguely-worded articles in the Penal Code, such as Articles 258, 88, 79 and Article 19 – holding lawyers criminally responsible for not reporting clients to the authorities for a number of crimes.

5. The US Mission in Hanoi to organize seminars (such as one on the upcoming UPR of Vietnam in early 2019) and invite independent civil society organizations to participate. This will counter the authorities’ policy in using all means to deny unregistered CSOs the physical space needed for their meetings and to encourage and legitimize their work.

6. Consider designating Vietnam as a Country of Particular Concern as the US Commission on International Religious Freedom (USCIRF) has recommended.

7. Use the Magnitsky Act as leverage for negotiation of the above.