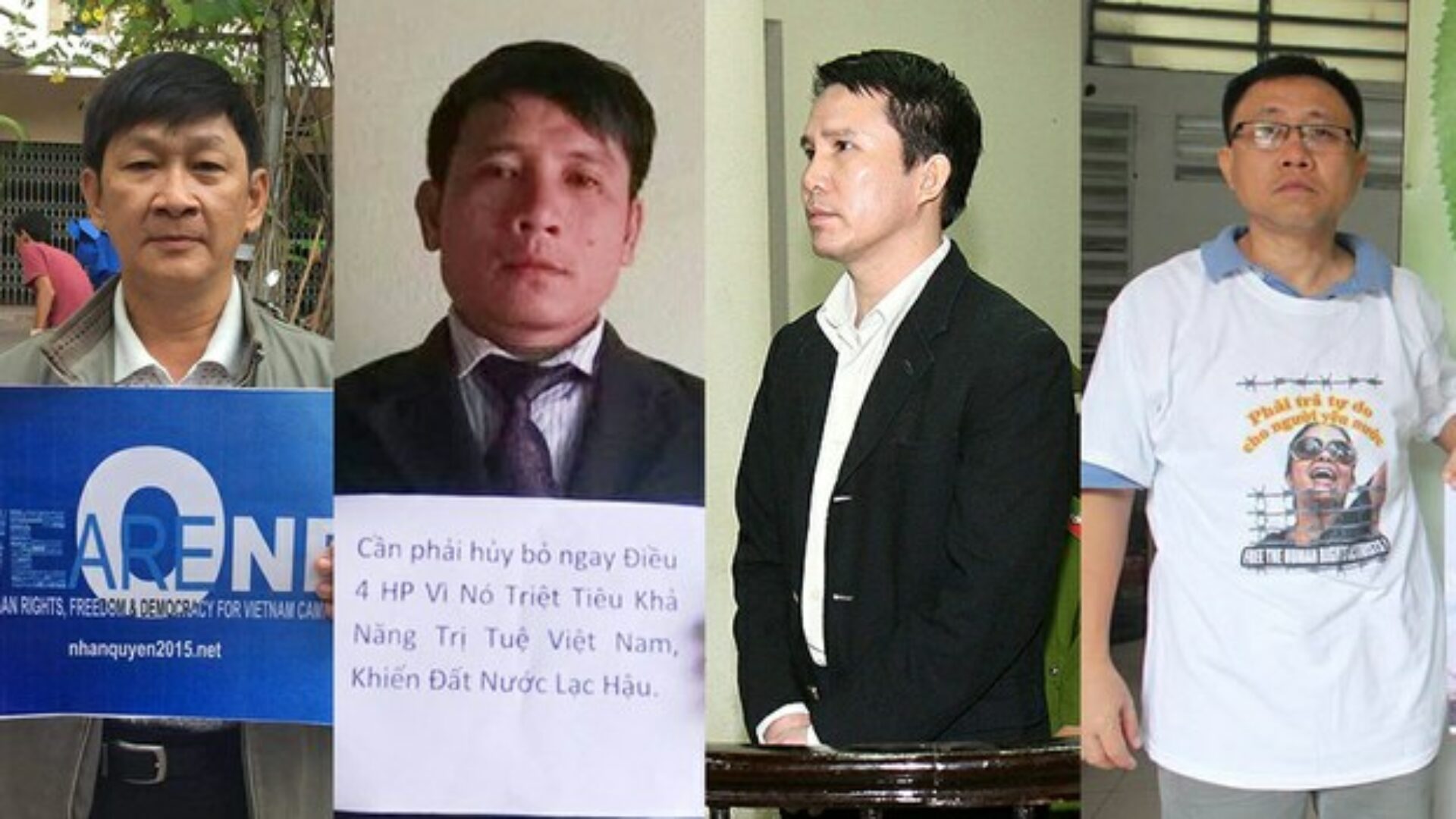 On 30 July 2017, Vietnamese authorities arrested four activists in Ha Noi, Ho Chi Minh City, and Thanh Hoa province. They are Nguyễn Trung Tôn, 45, a Protestant pastor from Thanh Hoa province; Phạm Văn Trội, 45, from Hanoi; Trương Minh Đức, 57, from Ho Chi Minh City; and Nguyễn Bắc Truyển, 49, from Ho Chi Minh City. Each of the four, all men, has previously been imprisoned for his peaceful activities. The four are prisoners of conscience, having been deprived of their liberty solely for peacefully exercising their human rights to freedom of expression and association. Amnesty International calls on the Vietnamese authorities to release all four immediately and unconditionally, release all other prisoners of conscience and end its policy of intimidating, arresting and punishing peaceful activists.

The four activists have been accused of “carrying out activities aimed at overthrowing the People’s Administration” under Article 79 of the 1999 Penal Code. The offence, which falls under the vaguely worded “national security” section of the Code, provides for a sentence of up to life imprisonment or capital punishment.

The arrests are part of an intensifying crackdown on the peaceful exercise of the rights to freedom of expression, assembly, and association in Viet Nam that has seen lengthy prison sentences handed down to two prominent human rights defenders in the last five weeks. Prior to the most recent arrests, at least seven other activists had been arrested in the last six months.

The four men arrested on Sunday are alleged to have connections to human rights lawyer Nguyễn Văn Đài who was himself arrested in Ha Noi on 16 December 2015 and has, along with his colleague Le Thu Ha, been detained without trial for more than 18 months. Both Nguyễn Văn Đài and Le Thu Ha were initially accused of “conducting propaganda” against the state under Article 88 of the 1999 Penal Code. However, according to Vietnamese police and state-controlled media, Nguyễn Văn Đài and Le Thu Ha are now accused of committing an offence under Article 79 along with those recently arrested.

Nguyễn Văn Đài is a well-known human rights lawyer. In 2006 he founded the Committee for Human Rights in Viet Nam – now called the Vietnam Human Rights Centre – and was one of the original signatories to an online petition calling for freedom and democracy in Viet Nam, which garnered the support of thousands. Between 2007 and 2011, Nguyễn Văn Đài served four years in prison after being convicted of “conducting propaganda” against the state. In April 2013, he founded the Brotherhood for Democracy, envisioned as a coordinated and collective movement for achieving democracy in Viet Nam.

Pastor Nguyễn Trung Tôn has written about freedom of religion and corruption in Viet Nam. He was arrested in January 2011 and convicted of “conducting propaganda” against the state, serving a sentence of two years’ imprisonment.

Phạm Văn Trội was arrested in September 2008 for unfurling banners, distributing leaflets, posting information on the internet criticizing government policies, and calling for democracy in Viet Nam. In October 2010 he was convicted of “conducting propaganda” against the state and served a sentence of four years’ imprisonment.

Journalist and labour rights activist Trương Minh Đức has written about corruption and abuse of authority in Viet Nam. He was arrested in May 2007 and in March 2008 was convicted of “abusing democratic freedoms to infringe upon the interests of the state” under Article 258 of the Penal Code, serving a sentence of five years’ imprisonment.

Nguyễn Bắc Truyển is a human rights lawyer who in 2007 was convicted of “conducting propaganda” against the state and sentenced to three and a half years’ imprisonment. Since his release in May 2010, he has been a vocal member of an association of former prisoners of conscience.

A sustained crackdown on human rights

Viet Nam is in the midst of a sustained crackdown on human rights. In the last five weeks, two prominent human rights defenders were convicted of “conducting propaganda” against the state and sentenced to lengthy prison sentences.

On 29 June 2017, Nguyễn Ngọc Như Quỳnh, also known by her blogging pseudonym, Mẹ Nấm (Mother Mushroom), was sentenced to 10 years’ imprisonment for her activities on Facebook and other social media, including writing, uploading and sharing articles and video content critical of the ruling Communist Party of Viet Nam and the state. On 25 July 2017, Trần Thị Nga was sentenced to nine years’ imprisonment for “posting video clips and documents containing anti-state propaganda on the internet”. The videos related to issues such as pollution of the environment and corruption. Both decisions have received widespread international coverage and been condemned by local and international human rights groups, United Nations human rights experts, and diplomatic representatives of the United States and the European Union in Vietnam.

Both Trần Thị Nga and Nguyễn Ngọc Như Quỳnh had raised concerns about the authorities’ response to the 2016 Formosa environmental disaster, which severely affected fish stocks in several Vietnamese provinces. The incident has impacted the livelihoods of up to 270,000 people and led to sustained activism and protests across the country on a scale rarely seen.

Amnesty International urges the Vietnamese authorities to comply with Viet Nam’s human rights obligations, and drop all charges against those who have been peacefully carrying out activities to promote and protect human rights and/or peacefully exercising their right to freedom of expression, opinion or belief, assembly, and/or association. The international community must condemn, in the strongest possible terms, the current crackdown on human rights in Viet Nam, and advocate for the immediate release of all prisoners of conscience.

BACKGROUND Amnesty International has documented information on at least 90 persons currently deprived of liberty whom the organization considers prisoners of conscience, including bloggers, labour and land rights activists, political activists, ethnic and religious minorities, and advocates for human rights and social justice who have been convicted solely for peacefully exercising their human rights. In many of these cases there have been concerns about unfair trials, incommunicado detention, and torture and ill-treatment of those detained. Prison conditions in Viet Nam are harsh, with inadequate food and health care that falls short of the minimum requirements set out in the UN Standard Minimum Rules for the Treatment of Prisoners (Nelson Mandela Rules) and other international standards. Treatment of prisoners of conscience has been documented by Amnesty International in a report, Prisons within prisons: Torture and ill-treatment of prisoners of conscience in Viet Nam , July 2016, available at https://www.amnesty.org/en/documents/asa41/4187/2016/en/.