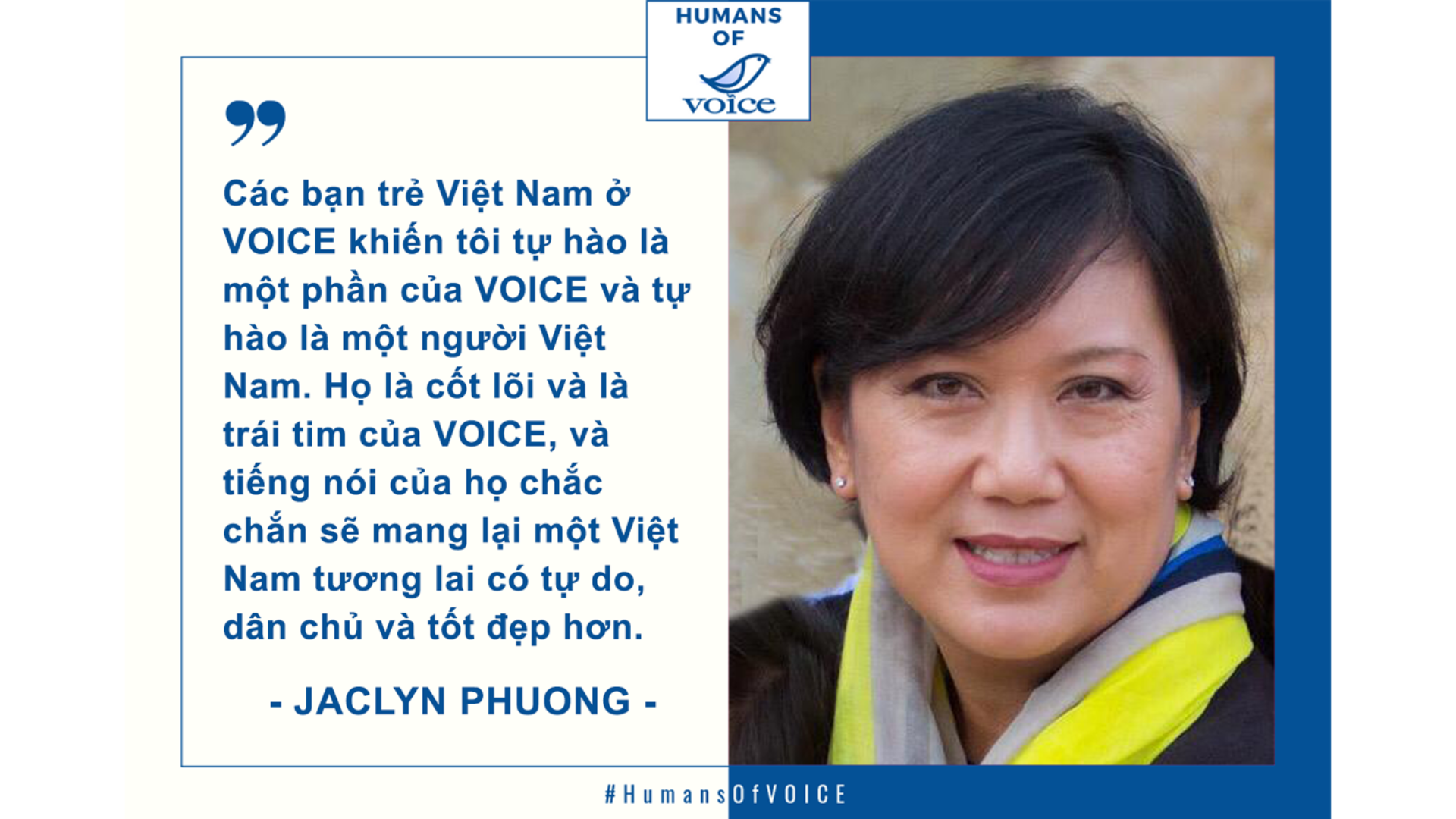 Jaclyn Phuong Fabre is the president and treasurer of VOICE’s Board of Directors. She lives in Santa Barbara, California with her husband and two children.

Like many members of the VOICE family, I became involved with VOICE through Hoi Trinh. We have been friends for the past few decades, since our days working together in Hong Kong assisting Vietnamese asylum seekers. I joined VOICE Board of Directors in 2012.

Through VOICE, I have met so many dedicated and passionate people from all over the world.

I am most impressed and inspired by the young Viet nationals who join VOICE as interns and staff. Here are young people putting everything on the line, their safety, security, livelihood and life, to fight for what they believe in. Young Viets with immense insights and talents—writers, scholars, artists, leaders, activists–dedicating their skills and talents toward building a strong, independent and vibrant civil society in Vietnam. Through their writings, photography, films, and individual initiatives, they are speaking out and standing up against the repressive communist government. Whether the Viet interns and staff are active inside or outside of Viet Nam, they do so at great personal risks. Unlike many of us “hyphenated Vietnamese” (Viet-American, Viet-Australian, Viet-Canadian, etc.), they are defenseless against the Vietnamese communist government, without protection from another of country of residence or citizenship. They epitomize activism.

Through this series of “Humans of VOICE”, we get to know many involved VOICE members and affiliates. However, some of the most admirable and formidable activists cannot be featured because they are Viet nationals. Openly sharing their association with VOICE would place them in precarious situations, exposed to retributions. This, in itself, is indicative of the authoritarian repressiveness of communist Viet Nam. I hope someday, stories such as these few examples can be told in full:

– T was trained as a doctor. She gave up medicine and joined VOICE an intern. She currently holds a leadership position in VOICE team, and just became a new mom.

– C is a filmmaker. His documentary has touched thousands internationally. He’s currently living in hiding because he was targeted and beaten severely by government officials.

So many young people with remarkable accomplishments and stories to share. They make me proud to be a part of VOICE and proud to be a fellow Vietnamese. They are the core and heart of VOICE, and their voices will ensure the future of a free, democratic and better Viet Nam.